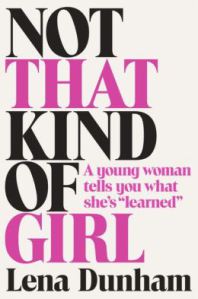 Review: Not That Kind of Girl by Lena Dunham

Note: I have mixed feelings regarding Lena Dunham after Jezebel covered author Zinzi Clemmons’s decision to stop writing for Lenny Letter in November of 2017, but I am leaving this review up because it reflected my views at the time it was written in 2014.

Title: Not That Kind of Girl: A Young Woman Tells You What She’s “Learned”
Author: Lena Dunham
Rating: ★★★★
Summary: In Not that Kind of Girl, Dunham illuminates the experiences that are part of making one’s way in the world: falling in love, feeling alone, being ten pounds overweight despite eating only health food, having to prove yourself in a room full of men twice your age, finding true love, and, most of all, having the guts to believe that your story is one that deserves to be told. Exuberant, moving, and keenly observed, Not that Kind of Girl is a series of dispatches from the frontlines of the struggle that is growing up.

There’s a lot of speculation about this book, mostly surrounding Lena Dunham’s very high advance – but I don’t know how to speak to that, to agree with or argue against how the ends justify the means. I just really liked this book, and that kind of surprised me. (Even though it really shouldn’t.) I don’t watch Girls nor do I follow the twists and turns of Dunham’s career. I’ve heard of Dunham but don’t know anything about her, which cleared the board in terms of expectations. I didn’t go into Not that Kind of Girl ready to confirm the thought that Dunham shouldn’t have been paid a lot of money to talk about her exceptionally successful life as a white female born and raised in New York City. Nor did I become disappointed when the reality of a memoir failed to live up to the hype I’d preconceived.

Dunham prefaces her book with the following sentiment: “And if I could take what I’ve learned and make one menial job easier for you, or prevent you having the kind of sex where you feel you must keep your sneakers on in case you want to run away during the act, then every misstep of mind was worthwhile.” Why would I shut someone out who has experienced more than I? Who has learned more and become able and willing to impart that knowledge? That then becomes my prejudgement, a preconceived notion that whatever Dunham says isn’t important simply because she’s the one who’s saying it.

And that’s dumb and silly.

Because it takes guts to write a book about one’s own life, and even more guts to put that story out into the world. It takes courage to say that one’s story holds merit—and if you take nothing else away from this work, remember that.